Do You Need Overland Flood Insurance?

With the increase in flooding across Ontario in the last few weeks, many homeowners are starting to consider whether to include Overland Flood Insurance as part of their coverage.

The average cost of a flooded basement can be $40k – $80k to repair.  Which begs the question; Why do most homeowners still not have Overland Flood Insurance?

The answer is likely because this type of insurance was not available prior to 2013 when severe flooding affected Toronto and Alberta.

“That was primarily because we did not have flood risk maps developed for the whole country. The insurance industry needs to be able to quantify the risks so they can assess which premiums to charge which people. Up until then there was simply no risk mapping done to be able to support such policies.”

Is Water The New Fire?

It has been reported that Insurers are paying more towards water damage claims than fire damage claims – even though most home insurance policies were designed to protect against fire damage.

And we have no reason to believe that this number will go down.  With the aging sewer system combined with extreme weather, the infrastructure simply can’t handle the level of precipitation during a severe rain storm.

~University of Waterloo professor Blair Feltmate, leader of the Intact Centre on Climate Adaptation via OttawaCitizen.com

How Much Can Flooding Cost Homeowners In Damages?

If the experts are saying that flooding is the number 1 risk facing Ontario homeowners, what should homeowners be doing to protect their investment and avoid financial hardship?

When it comes to flooding, there are two types of Home Insurance you can buy:

Since the severe floods of 2013, insurance companies have offered Overland Flood Insurance as an add-on.  In other words, if you did not sign up for it, you probably don’t have it.  Best to contact your insurance company and ask what is covered under your current plan and if you can get Overland Flood damage covered.

Homeowners should also be aware that if water is entering the basement through a crack in the foundation, for example, it falls under the category of seepage and could signal a maintenance issue that would also prevent an insurance payout.

Insurance policies have limitations on what types of water damage they will respond to. Which means that if the flood could have been prevented with proper drainage and waterproofing systems in your home, you will not be covered.

Experts believe that extreme weather will increase substantially in the next 50 years. It is the homeowner’s responsibility to review their policies carefully and take action to protect their home from flooding.

At RCC we recommend a few tips to mitigate damage including:

What To Do When Your Basement Floods: 5 Crucial Steps

RCC Waterproofing and Foundation Repairs has been servicing Ontario customers for over 100 years. Their repairs have outlived lifetime warranties by at least two times. The company provides professionally trained sales representatives to view, assess and quote on repairs. The installers are employees of RCC and most have long term working relationships. RCC carries full insurance including WSIB coverage and HST registration.

Which Material is Used for Waterproofing? 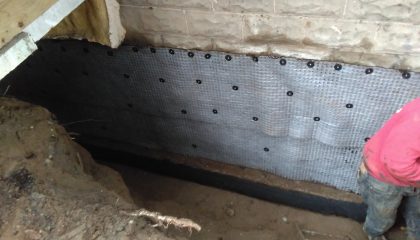 What are Drainage Tiles and Why Do You Need Them? 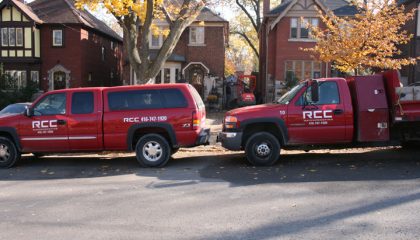 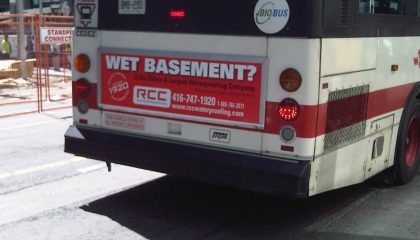 Wet Basement? – RCC Waterproofing Slogan and Branding Over the Years